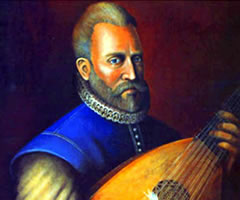 John Dowland was the finest lute-player of his age, and perhaps the first ‘modern’ songwriter in the sense of a composer bringing a highly romantic and individual sensibility to the setting of words for solo voice. As a soloist employed at a number of European courts, his life was nomadic and unsettled. A spendthrift, he died in poverty, though amongst the highest paid musicians of his age. Against this background, it is not hard to suppose that the darkness of many of his songs reflects in some way a turbulent personal life of which much remains a mystery.

Since the 1920s, when the original volumes of The English School of Lutenist Song Writers were issued, Dowland’s vocal music has occupied an important position in the Stainer & Bell catalogue, and the continuing popularity of his three books of airs, and the songs from A Pilgrimes Solace and A Musicall Banquet, plus selections of fifty songs in two volumes (each available for high or low voice) testify to his enduring popularity with singers. Composers, too, have responded to his music, Britten, Tippett and Harrison Birtwistle amongst others having written major works in which Dowland’s art is a strong creative influence.

Filter Titles by
Back To Top
Copyright © 2020 Stainer & Bell Ltd. - All Rights Reserved
The site uses cookies to offer you a better experience and by continuing to browse the site you accept our Cookie Policy. You can change your settings at any time. Find out more.