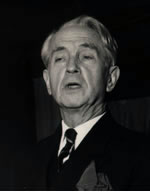 Herbert Howells was born in Lydney, Gloucester on 17th October 1892. In 1912 he won a scholarship to the Royal College of Music, studying composition with C. V. Stanford, Herbert Parry and Charles Wood and he went on to teach composition at the RCM for nearly sixty years. Primarily known nowadays for his church music, Howells also wrote extensively in most instrumental chamber genres. The titles published by Stainer & Bell all date from his twenties and include his much-loved carols A Spotless Rose, Here is the little door and Sing Lullaby.

Filter Titles by
Back To Top
Copyright © 2020 Stainer & Bell Ltd. - All Rights Reserved
The site uses cookies to offer you a better experience and by continuing to browse the site you accept our Cookie Policy. You can change your settings at any time. Find out more.